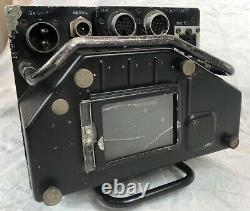 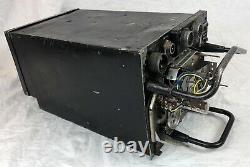 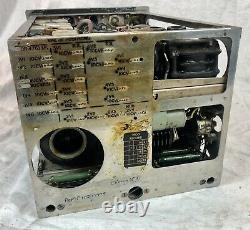 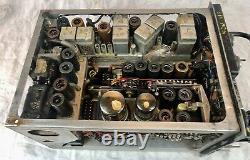 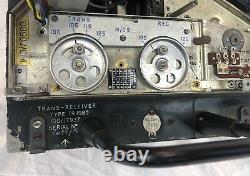 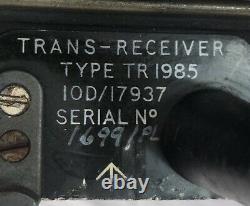 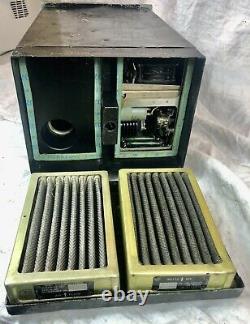 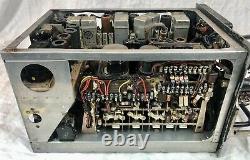 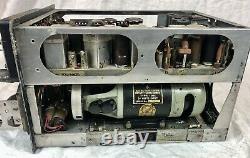 British RAF Aircraft, Radio Transmitter / Receiver / Air / Ground - Communications. As used on the RAF Canberra Bomber Aircraft, plus others. Type TR1985, 10D/17937, Serial No 1699/PL, with military broad-arrow mark. Dated around 1950 / 70's and made by ECKO. Good used condition for age, with some wear, scratches, marks and dints. Appears complete and potentially in working order, but untested. Post WW2 English Electric'Canberra', is a British first-generation jet powered medium bomber. It was developed by English Electric during the mid-to-late 1940s in response to a 1944 Air Ministry requirement for a successor to the wartime de Havilland Mosquito fast bomber. Among the performance requirements for the type was an outstanding high-altitude bombing capability and high speed. These were partly accomplished by making use of newly developed jet propulsion technology.

When the Canberra was introduced to service with the Royal Air Force (RAF), the type's first operator, in May 1951, it became the service's first jet-powered bomber. In February 1951, a Canberra set another world record when it became the first jet aircraft to make a non-stop transatlantic flight. Throughout most of the 1950s, the Canberra could fly at a higher altitude than any other aircraft in the world and in 1957, a Canberra established a world altitude record of 70,310 feet (21,430 m). Due to its ability to evade the early jet interceptor aircraft and its significant performance advancement over contemporary piston-engined bombers, the Canberra became a popular aircraft on the export market, being procured for service in the air forces of many nations both inside and outside of the Commonwealth of Nations. The type was also licence-produced in Australia by the Government Aircraft Factories and in the US by Martin as the B-57 Canberra.

The latter produced both the slightly modified B-57A Canberra and the significantly updated B-57B. Canberras served in the Suez Crisis, Vietnam War, Falklands War, Indo-Pakistani wars and numerous African conflicts. In several wars, each of the opposing sides had Canberras in their air forces. The Canberra had a lengthy service life, serving for more than 50 years with some operators.

In June 2006, the RAF retired the last of its Canberras, 57 years after its first flight. Three of the Martin B-57 variant remain in service, performing meteorological and reentry tracking work for NASA, as well as providing electronic communication (Battlefield Airborne Communications Node or BACN) testing for deployment to Afghanistan. There is a lot of information available online about this item and I have included some links below. The item "Canberra Aircraft, Radio Transmitter / Receiver / Communications, RAF, TR1985" is in sale since Thursday, April 29, 2021. This item is in the category "Collectables\Militaria\Other Militaria\Air Force".