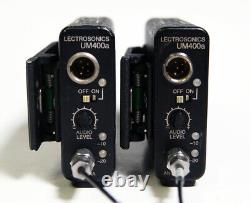 Frequency response is 30 Hz to 20. Two diversity modes are offered in the SRa. SmartDiversity reception is employed by independently combining antenna phase for each receiver channel. Alternately, the two channels can be used together in True Diversity Ratio mode as a single receiver.

Graphic spectrum scanning provides quick and easy location of clear operating frequencies for interference-free operation. The two Digital Hybrid Wireless receivers inside the SRa offer 256 frequencies each in one of nine available blocks, and operate with any of the Lectrosonics 400 Series transmitters without a compandor in the audio path. In addition, compatibility modes also facilitate operation with Lectrosonics 100 Series, 200 Series, and IFB analog systems, along with analog transmitters from two other manufacturers.

Transmitter battery strength is monitored in the SR when using compatibility modes for 200 and 400 Series transmitters. While mounted on a camera, the SRa is splash resistantthanks to sealed membrane switches and LCD, along with a special gasket covering the slot opening.

The SRa can be used with slot-equipped Sony professional cameras. Receiver audio frequency response is 30 Hz to 20 kHz, ±1 dB, while overall system response is determined by the transmitter and microphone element used.

Input levels are accurately indicated by two LEDs on the control panel. Digital Hybrid Wireless is a revolutionary new design that combines digital audio with an analog FM radio link to provide outstanding audio quality and the extended operating range of the finest analog wireless systems. The design overcomes channel noise in a dramatically new way, digitally encoding the audio in the transmitter and decoding it in the receiver, yet still sending the encoded information via an analog FM wireless link.

This proprietary algorithm is not a digital implementation of an analog compandor. Instead, it is a technique which can be accomplished only in the digital domain, even though the audio inputs and outputs are analog signals. The process eliminates a compandor and its artifacts. DSP controlled dual envelope input limiter. DSP emulations for analog compatibility. The Lectrosonics SREXT is an a. Dapter kit for SR receivers that provides two TA3 audio output jacks and a locking power connector. It has spare mounting screws in dummy holes in adapter. This particular wireless microphone device operates in portions of the 617-652 MHz or 663-698 MHz frequencies. Beginning in 2017, these frequencies are being transitioned by the Federal Communications Commission (FCC) to the 600 MHz service to meet increasing demand for wireless broadband services. Users of this device must cease operating on these frequencies no later than July 13, 2020.

In addition, users of this device may be required to cease operations earlier than that date if their operations could cause harmful interference to a 600 MHz service licensee's wireless operations on these frequencies. The item "Used Lectrosonics SRA/5P 2-Channel Receiver & (2) UM400a Transmitters Block 25" is in sale since Tuesday, March 9, 2021.